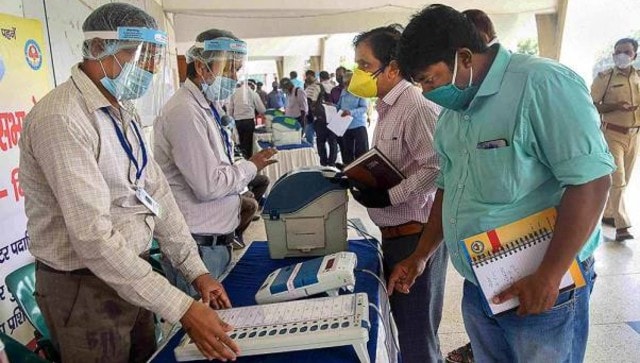 In a scenario where the two main blocks – the Nitish Kumar-led NDA and Tejashwi Yadav-led Grand Alliance – fail to attain clear majority, pollisters predict the Chirag Paswan-led LJP and the six-party GSDF to emerge as kingmakers

After the conclusion of the three-phase Bihar Assembly elections on Saturday, most pollsters predicted an advantage for the Congress-Rashtriya Janata Dal (RJD) Grand Alliance, however, the chances of a hung Assembly in Bihar seemed likely.

In the 2015 elections, the RJD had won 81 seats while the Congress had bagged 27 seats in the 243 seat Assembly. The halfway mark for any of the alliances to claim a victory is 122.

While a clear picture may emerge only on counting day (10 November), here’s a detailed overview of the forecasts that various pollsters have come out with at the close of the voting process:

A clear win for Grand Alliance

On Saturday, only two pollsters — Today’s Chanakya and India Today-My Axis predicted a clear win for the Tejashwi Yadav-led Grand Alliance while a defeat for the Nitish Kumar-led NDA alliance.

India Today-My Axis: As per the India Today-My Axis poll, 44 percent of the survey respondents preferred Tejashwi Yadav as the next Bihar chief minister, while 35 percent wanted incumbent Nitish Kumar to get another term.

Two pollsters, Republic-Jan ki Baat and ABP news-C Voter, predicted a range swinging between the minority and majority mark for both the ruling alliance as well as the main challenger the Bihar Grand Alliance led by Tejashwi Yadav.

Republic TV-Jan ki Baat: According to the Republic TV–Jan ki Baat survey, the Mahagathbandhan could form the government in Bihar by securing 118-138 seats. The NDA, meanwhile, is projected to win 91-117 seats, the LJP could get 5-8 seats, while others are projected to win 3-6 seats.

ABP News C-Voter survey: Based on data collected till 5 pm, the ABP News C-voter survey predicted that the RJD, with 81-89 seats, could emerge as the single largest party while ally Congress could secure 21-26 seats and 6-13 seats for the Left. It also forecast that the BJP could register a victory in 66 constituencies and the JD (U) in 38-46 constituencies.

Thus, the NDA is projected to get 104-128 in the 243-member house, whereas Mahagathbandhan could ger 108-131 seats. The survey claimed that a hung House cannot be ruled out as both alliances will be in a neck-to-neck battle.

The pollster will update its data later based on the responses collected during the last hour of polling.

TV9 Bharatvarsh: According to the TV9 Bharatvarsh survey, which predicted an edge for the Congress-RJD alliance its numbers for the Grand Alliance — 115-125 seats —  swung across the magic figure while the NDA — projected to win 110-120 — is likely to fall short of a majority.

The TV news channel projected three to five for Chirag Paswan’s LJP and 10-15 for others. Based on the numbers, it’s likely that both the LJP and Others will emerge as kingmakers.

Times Now-CVoter: According to the Times Now-CVoter survey, which predicted a hung Assembly, the LJP’s role would be limited and it would be the Other block – the six-party Grand Secular Democratic Front formed by BSP, AIMIM, RLSP, etc – that could emerge as the kingmaker.

The first projection from Times Now C-Voter survey predicted a lead for the Tejashwi Yadav-lead Mahagathbandhan but forecasted that the alliance comprising RJD, Congress, CPM and other small parties may stop short of the magic number.

The final figures released by the pollster have projected 116 seats for the NDA, 120 seats for the Grand Alliance, one seat for LJP, and six seats for Other parties.

Without giving the demographic break up of survey responders, ABP News-C Voter survey said in its bulletin that Millenials and first-time voters favoured Tejashwi over Nitish in these elections.

The news channel said the youth, which is seen to be the BJP’s core constituency,  supported the Mahagathbandhan this time, whereas older voters, who presumably were still around during the 15-year-long RJD rule have chosen to back Nitish despite some element of disenchantment and despondency.

Similarly, the India Today-Axis My India exit poll also reported that 47 percent of voters aged between 18 to 35 years back Tejashwi Yadav, while voters aged 51 and above overwhelmingly wanted Nitish back in power.

The counting of votes is scheduled to take place on 10 November.