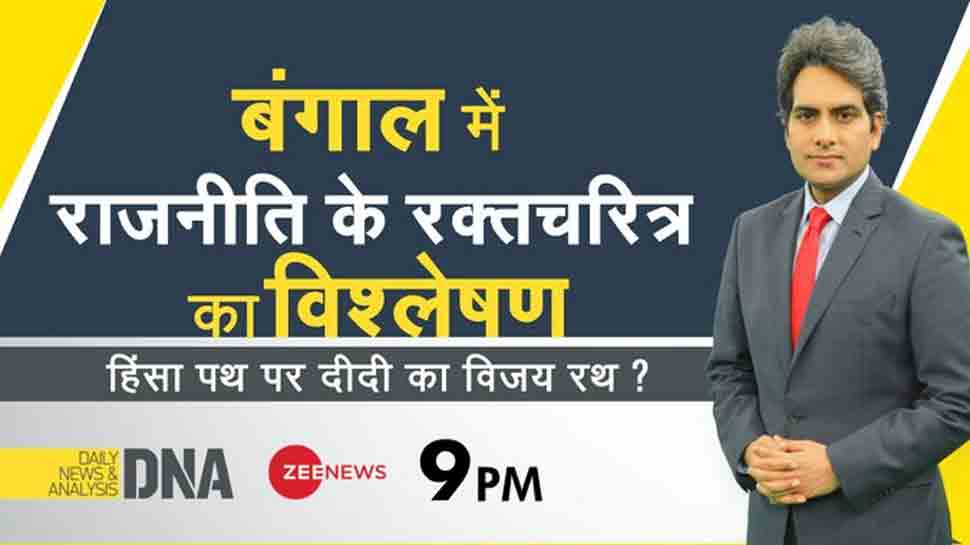 New Delhi: West Bengal was in the throes of widespread violence on Monday (May 3) that allegedly left several BJP workers and supporters dead and injured in clashes. Zee News Editor-in-Chief Sudhir Chaudhary on Monday (May 3) explained how Trinamool Congress is sponsoring violence carried out by its supporters and goons against those who cast their votes in favour of BJP in the assembly election.

Several shops were allegedly looted and almost thousands of houses were ransacked in Bengal, a day after the Trinamool Congress romped home, pocketing 213 of the 292 assembly seats that went to polls and secured a third straight term in office.

And while the Election Commission declared the result of the assembly election 2021 on Monday, the state also witnessed the results of casting votes for BJP. The result is that in South 24 Parganas district, people who voted for BJP, and the saffron party workers have been brutally attacked by alleged Trinamool Congress goons. Their houses have been damaged and shops have been looted. Results of political violence were also seen in Arambagh where the BJP office was vandalized and set ablaze by goons of Trinamool.

Similar incidents were also reported from Nandigram where after the poll panel announced BJP leader Suvendu Adhikari as the winner, some unidentified goons attacked his car and pelted stones on it. BJP workers and activitis were attacked in several areas in the state after the declaration of the poll result. In Sonarpur, a BJP worker was lynched by alleged goons.

All this happened after the Mamata Banerjee-led Trinamool Congress comfortably won over 200 seats in West Bengal. And the Trinamool activists celebrated the occasion with a bloodbath.

If one takes a look at the record of post-poll violence in the state, the Trinamool, here too, will emerge victorious. In the last 24 hours, Trinamool workers have been accused of killing at least five BJP supporters. And these photos are the biggest proof of the coup.

These Trinamool Congress workers celebrating democracy after the assembly election result in West Bengal are clearly visible in these pictures. After the result declaration, the TMC workers penalised voters and activists who voted for the BJP in a barbarous manner, that led to West Bengal Governor Jagdeep Dhankar and the Ministry of Home Affairs expressing their concerns.

Bengal Governor Jagdeep Dhankar said, “I am troubled and worried about the many reports of violence, arson and killings from different parts of the state. Party offices, houses and shops are under attack and the situation is worrisome.” He summoned state Home Secretary, DGP and Kolkata Commissioner of Police and directed them to restore peace.

One thing that needs to be noted here that Bengal Chief Minister Mamata Banerjee, who claimed that she was being assaulted during an election campaign, is once again silent on the violent episode. This is because the violence is taking place against people who supported and cheered for BJP during the election. This leads to the question to whether democracy is in danger in West Bengal?