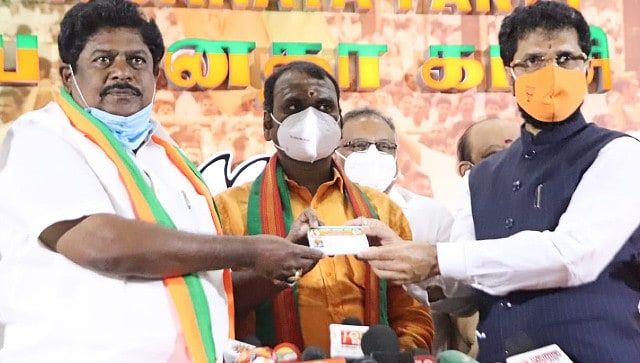 A veterinary doctor and agriculturist, KP Ramalingam hails from Salem district and belongs to the Gounder community, which holds sway in the western region of Tamil Nadu

KP Ramalingam was suspended from the DMK early this year for ‘violation’ of party discipline. Twitter@BJP4TamilNadu_640

Chennai: Former DMK MP, KP Ramalingam joined the BJP here on Saturday and he said he would try to convince the expelled Dravidian party leader MK Alagiri to join the saffron party.

Ramalingam joined the BJP in the presence of national general secretary and Tamil Nadu in-charge, CT Ravi and Tamil Nadu unit president L Murugan at the party office in Chennai ahead of the visit of senior leader and Union Home Minister Amit Shah to the metropolis.

The former MP of both Lok Sabha and Rajya Sabha said he would try to convince Alagiri, whom he supported to the hilt while in the DMK to join the BJP adding however a decision has to be taken only by him.

pandemic. He was also relieved from his party post of secretary of agriculture wing.

Welcoming him to the party fold, Ravi said on his Twitter handle, “It is a great sign that former DMK MP Thiru Dr KP Ramalingam has joined @BJP4TamilNadu on the day UnionHome Minister Sri @AmitShah is visiting Chennai. This will not only weaken DMK and its base but further strengthen BJP across the State.”

Expressing confidence that Ramalingam’s entry would strengthen his party, the senior leader, extended a warm welcome to him. Tamil Nadu senior leaders including Pon Radhakrishnan, CP Radhakrishnan and H Raja were present.

The 66-year old Ramalingam, a staunch Alagiri loyalist, stood with the latter, when a quiet battle unfolded to succeed Karunanidhi in the DMK to the top post of party chief, years ago.

The late patriarch, however, had given ample indications over the years, that his choice and that of the party would be Stalin who eventually became the party president following the death of Karunanidhi in 2018. Alagiri, who was expelled in 2014, could not return to the party since then.

Ramalingam was among over 30 party leaders who were suspended following the party’s rout in the 2014 Lok Sabha polls and the former MP had then dubbed the party decision as autocratic and had later alleged witch-hunting. In 2015, the party made him state secretary of the farmers’ wing though he had faced disciplinary action earlier.

Ramalingam was elected to the 11th Lok Sabha (1996-97)from Tiruchengode on a DMK ticket and the party also sent him to the Rajya Sabha (2010-16). Before he joined the DMK, he was with the AIADMK and was elected from Rasipuram constituency in the 1980 and 1984 Assembly elections.

Following the death of AIADMK founder MG Ramachandran in1987 he threw his weight behind Janaki Ammal, the wife of the late Chief Minister. A veterinary doctor and agriculturist, he hails from Salem district and belongs to the Gounder community, which holds sway in the western region of Tamil Nadu.