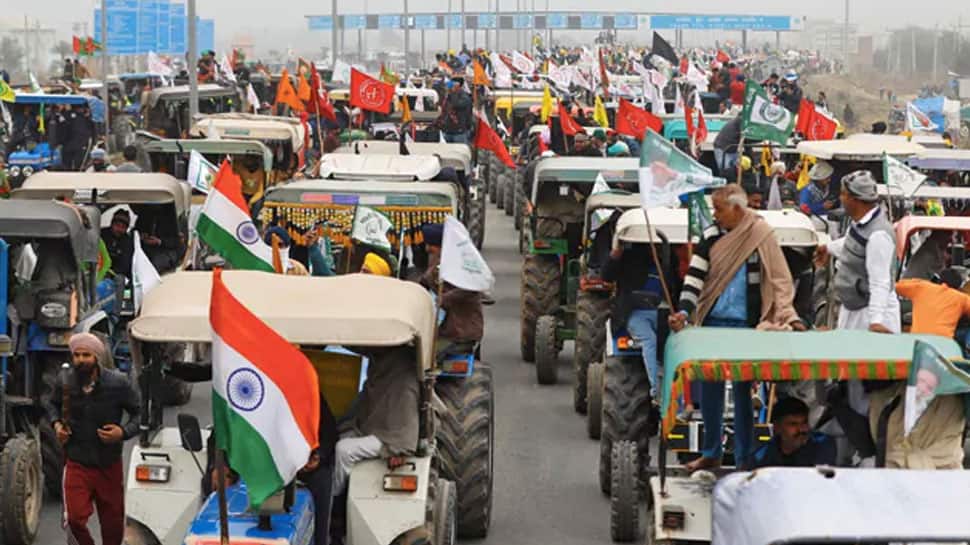 New Delhi: The national capital would be witnessing two big events on Tuesday -Republic Day celebrations and a farmers’ tractor rally – due to which Delhi has been turned into a fortress with the deployment of thousands of security personnel in central Delhi and several border points.

The Samkyukt Kisan Morcha, an umbrella body of 41 unions leading protests against the Centre’s farm laws, has said their tractor parade will not enter central Delhi and it will start only after the official Republic Day Parade on Rajpath concludes.

The unions said around two lakh tractors are expected to participate in their parade, which will move into the city from three border points–Singhu, Tikri and Ghazipur (UP Gate).

#WATCH: Farmers to hold tractor rally in Delhi today to protest against the Centre’s Farm Laws; visuals from near Ghazipur#RepublicDay pic.twitter.com/LJlkQtUExl

According to the unions, there is no limit on vehicles. Patrolling has been intensified at power substations in Delhi following a threat from the banned Sikhs for Justice outfit to disrupt the city’s supply during the Republic Day celebrations.

An official said around 6,000 security personnel have been deployed to maintain vigil. Facial recognition systems have also been set up at vantage points for suspect identification, the official said. The security personnel are keeping a hawk-eyed vigil over Rajpath, where President Ram Nath Kovind and Prime Minister Narendra Modi will be celebrating the occasion along with other dignitaries and thousands of people.

Checking and frisking at Rajghat will be done by personnel in PPE kits, with mask and face shield, keeping in line with COVID-19 protocols, the official said. A five-layer security cover has been deployed in and around the city to maintain law and order, a senior police officer said.

Deputy Commissioner of Police (New Delhi) Eish Singhal said more than 6,000 police personnel have been deployed at Rajpath for the Republic Day celebrations. Following COVID protocols, only 25,000 people will be allowed to attend the ceremony at Rajpath as opposed to over one lakh spectators who usually attended the event every year, he said.

“We have 140 CCTV cameras on the Republic Day parade route and along with the enclosures. We have identified and set up facial recognition systems at 30 spots on Rajpath from where the public would enter. “This system is fed with a database of nearly over 50,000 people, including that of suspected terrorists, criminals and anti-social elements,” said another senior police officer.

To maintain law and order during the farmers’ tractor parade, thousands of security personnel have been already deployed at several border points. Deependra Pathak, Special Commissioner of Police (Intelligence), claimed on Sunday that over 300 Twitter handles have been generated from Pakistan to disrupt the tractor parade.

Tractors from the Ghazipur border will cover some portion of the NH-24 from where they will take a right turn to Road Number 56, ISBT Anand Vihar, Apsara Border, Hapur Road, Bhopura, IMS College, Lal Kuan and Ghazipur Border, police said.

Hundreds of women farmers are also expected to drive tractors. Farmer leaders have appealed to those participating in the parade to carry enough ration for 24 hours and ensure that the rally remains peaceful. “No one should carry any weapon or drink alcohol. Banners carrying inciting messages are not allowed,” a farmer leader said.

Enacted in September last year, the three farm laws have been projected by the Centre as major reforms in the agriculture sector that will remove middlemen and allow farmers to sell their products anywhere in the country.

However, the protesting farmers have expressed their apprehension that the new laws would pave the way for eliminating the safety cushion of the minimum support price and do away with the ‘mandi’ system, leaving them at the mercy of big corporates.