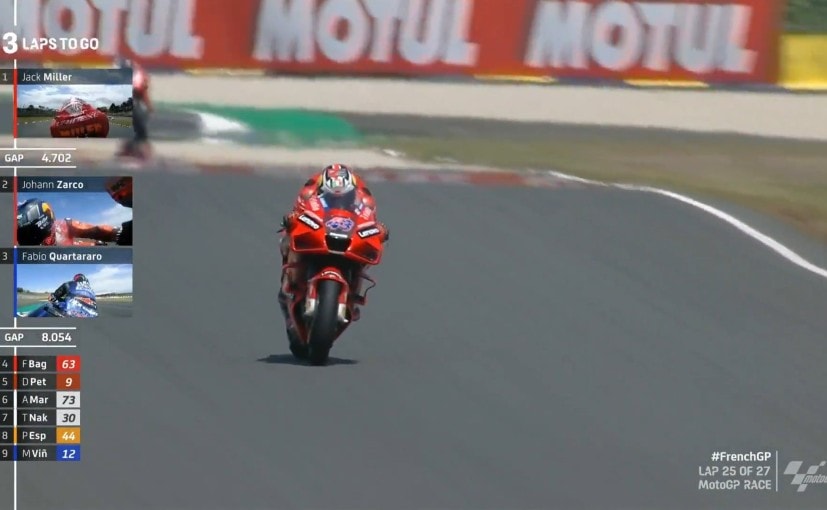 Ducati’s Jack Miller was one of the many riders to receive a double-penalty amidst challenging wet conditions made the MotoGP French GP a chaotic battle.

Jack Miller won the absolutely chaotic MotoGP French Grand Prix at Le Mans in what was a flag-to-flag race. The Ducati rider managed to overcome two long-lap penalties and a late charge from Johann Zarco on the Pramac Ducati to the win, while pole-sitter Fabio Quartararo on the factory Yamaha secured the final spot on the podium. The French GP was the first flag-to-flag race since Brno GP in 2017 after the rain gods were generous in the first half of the race. 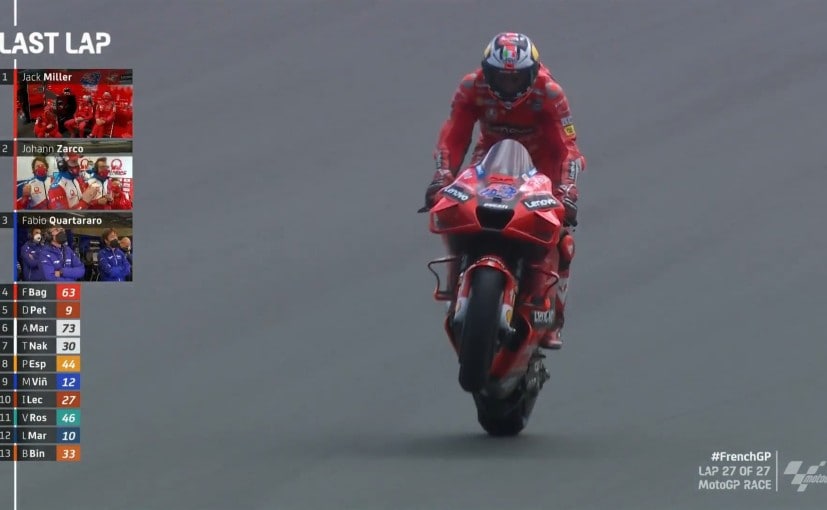 Miller has moved up to fourth in the rider standings while Quartararo is on top with 80 points, just one point over Bagnaia

The French GP saw Quartararo on pole but a third-placed Miller had a better start and managed to take the top spot leading into the first corner, followed by Yamaha’s Maverick Vinales and Quartararo. Meanwhile, Marc Marquez on the factory Honda moved up to P4 ahead of LCR rider Takaaki Nakagami. By the second lap, Vinales moved to take the lead from Miller and the top three riders were now separated with the rest of the pack by 1.7s.

The first spell of shower started to appear by Lap 3, and Miller bravely held on to the momentum regaining the top spot and Vinales dropped to fifth. Quartararo though was hot on Miller’s tail and the riders engaged in a hot battle for the leadership. The rider swapped positions across the fourth lap with Miller taking back the spot a lap later. However, the riders were called into the pits to swap for their wet bikes.

Miller and teammate Francesco Bagnaia were hit with double long-lap penalties for speeding in the pitlane, while Quartararo stopped on the wrong side of the Yamaha box, which earned him a long-lap penalty as well. This allowed Marquez to lead the race for the first time since Valencia 2019. The rider built a 2s lead over Quartararo and held on to the spot for a couple of more laps before being high-sided at the final corners. He joined back in 18th place but crashed out one final time while chasing the grid with 10 more laps to go.

Miller was quicker than Quartararo as he rejoined the track with the soft wet rear tyre. The Yamaha rider served his penalty on Lap 12 and Miller made the most of this opportunity to snatch the lead building a gap of up to nearly 4s in the final stages. The Frenchman had nothing to respond to the rider and Miller wasn’t under threat till the chequered flag was out on Lap 27. 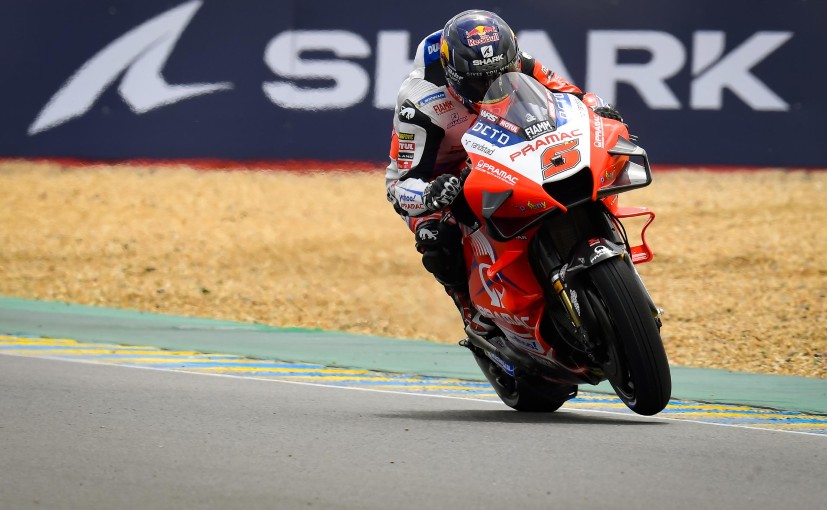 Johann Zarco passed Quartararo on Lap 21 without too much effort as the Yamaha rider struggled with his front tyre | Photo Credit: Eurosport

As the skies cleared towards the end of the race and the track dried up, Quartararo’s pace dropped with significant stress on his soft front wet tyre, allowing Johann Zarco to catch up on the factory Yamaha. The rider breezed past Quartararo on Lap 21 and went on to claim second with a gap of 3.970s. Meanwhile, the pole-sitter was over 14s adrift from the race leader but held on to the position denying the spot to Bagnaia.

Coming in fifth was Danilo Petrucci on the Tech3 KTM, followed by Alex Marquez on the LCR Honda finishing sixth with teammate Nakagami taking P7. Pol Espargaro of Repsol Honda claimed P8 with Iker Lecuona of Tech3 KTM and Vinales round up to the top ten riders.

Valentino Rossi finished at P11 on the SRT Yamaha while Franco Morbidelli recovered to take P16 after crashing on the opening lap. Luca Marini and Enea Basitniani of Avintia Ducati finished 12th and 14th respectively with KTM’s Brad Binder separating the two. Tito Rabat of Pramac Racing was one of the final finishers in the race.

The rain-soaked French GP saw a number of crashes that included both Suzuki riders Alex Rins and Joan Mir, and KTM’s Miguel Oliveira. Both Aprilias of Aleix Espargaro and Lorenzo Savadori were also out of contention due to mechanical issues.