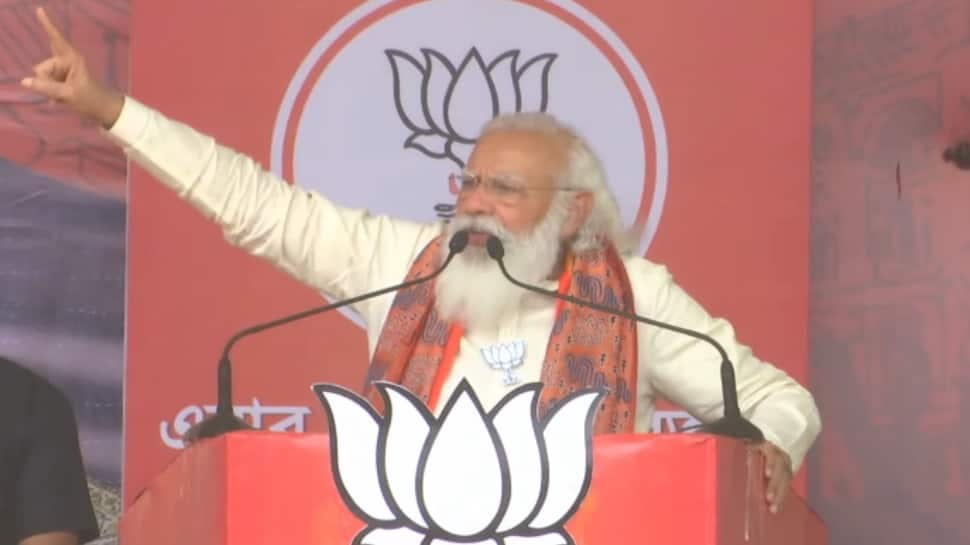 New Delhi: Continuing his attack on the West Bengal Chief Minister Mamata Banerjee, Prime Minister Narendra Modi on Monday (April 12, 2021) said that her bitterness is increasing as the Trinamool Congress (TMC) has been eliminated in just four phases of polls.

While addressing a public rally in West Bengal’s Bardhaman, PM Narendra Modi said, “Didi’s bitterness and anger are increasing daily. You have eliminated TMC in just 4 phases of polls. You have hit so many 4s, 6s that BJP has already scored a century.”

He added that those who were thinking of playing ‘khela’ had to face ‘khela’ themselves and asked, “Won’t Didi be angry then?”

Speaking at a massive rally in Bardhaman. https://t.co/PF05LCuYww

PM also said, “Didi o didi, if you want to unload your anger, I am here. Abuse me all you want. But don’t insult Bengal’s dignity and tradition.”

“Baba Sahab’s soul would be hurt by hearing such bitter words. Didi calls herself ‘Royal Bengal Tiger’. Such comments on SCs cannot be given by any TMC leader without Didi’s will,” he said.

PM Modi’s visit to West Bengal comes ahead of the fifth phase of the ongoing elections that will take place on April 17. The counting of votes for the eight-phase polls will be held on May 2.