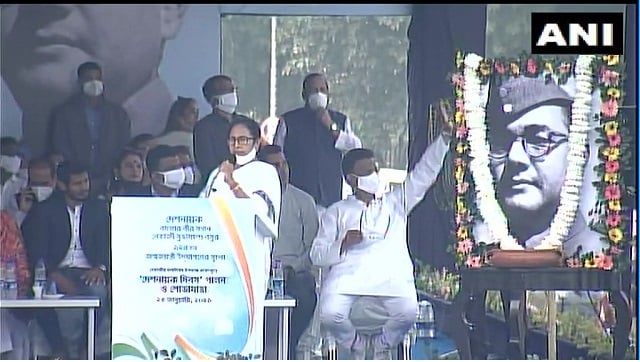 The BJP and the TMC sought to outdo each other in celebrating Netaji Subhas Chandra Bose’s 125th birth anniversary in poll-bound West Bengal on Saturday.

While Prime Minister Narendra Modi participated in several events in Kolkata, West Bengal chief minister Mamata Banerjee held a march to honour the freedom fighter. The ruling TMC dismissed Modi’s visit as a political gimmick, as the race for power heats up ahead of the state’s Assembly polls.

On Saturday evening, Modi addressed the ‘Prakram Diwas’ celebrations in Kolkata and lauded Bose for his “steely resolve” while the TMC celebrated the day as “Desh Nayak Diwas”.

“On this day, that brave son was born in the lap of Mother Bharati, who gave a new direction to the dream of independent India. From LAC to LOC, the world is witnessing the powerful avatar of India that was once envisioned by Netaji. India today is giving a befitting reply wherever attempts are made to challenge its sovereignty,” Modi said.

“Netaji reached Andaman and unfurled the Tricolour with his own soldiers. The declaration which he had made was the first government of ‘Akhand Bharat’ He was the first head of the Azad Hind Government,” he added.

The prime minister also said that Bose would have also been “proud that the government he dreamt of is fighting a pandemic with vaccines developed indigenously”.

“Netaji’s life, work and decisions are an inspiration for all of us. Nothing was impossible for a person with such steely resolve,” he said.

Modi also said that the Howrah-Kalka Mail, the train that begins at Howrah, will be renamed as ‘Netaji Express’.

Modi had a packed itinerary in Kolkata on Saturday, where, apart from visiting the National Library, he also inaugurated a “permanent exhibition” on Netaji at the Victoria Memorial.

Mamata and Modi shared the stage during the event at Victoria Memorial, however, Mamata refused to give her speech after some people raised ‘Jai Shri Ram’ slogans.

Banerjee had not yet started her speech when the slogan was raised by a section of the audience, PTI reported. She said such “insult” was unacceptable.

“This is a government programme and not a political programme. There has to be dignity. It doesn’t behove anybody to invite people and insult. I won’t speak. Jai Bangla, Jai Hind,” she said, wrapping up.

Earlier on Saturday, the PMO tweeted that the Centre had recently decided to celebrate Netaji’s birthday on 23 January every year as ‘Parakram Diwas’ to honour his “indomitable spirit and selfless service to the nation”.

We don’t pay tribute to Netaji only before polls: Mamata

Ahead of Modi’s visit to the state capital, Mamata held a massive rally or padayatra from Shyam Bazaar to Red Road to mark the occasion.

Addressing a programme at Netaji Bhavan, Mamata described Bose as an icon who had advocated unity among all communities in the country.

She also demanded that Netaji’s birthday on 23 January be declared a national holiday.

In a veiled attack on the Modi government, Mamta pointed out that Netaji was not given his due respect by the Centre until the upcoming elections in the state scheduled in April-May.

“We don’t remember Netaji before the elections. He is in our hearts for 365 days. We are in touch with his family,” she added.

Banerjee also alleged that there is a “game” going on to change the country’s national anthem “Jana Gana Mana”.

“Why the national Planning Commission, which was conceptualised by Netaji in independent India, was dissolved? Why the demand for a holiday on Netaji’s birthday by our government not yet met?”

She said, “I don’t understand Parakram. Subhas Chandra Bose was a desh premi, he was a desh nayak,” she said, adding that all the people of Bengal know this.

“He worked for all castes and communities. INA symbolised that,” said Mamata.

“We will celebrate the birthday of Netaji Subhas Chandra Bose as ‘Desh Nayak Diwas’. It is based on a great history. Rabindranath Tagore addressed Netaji as Desha Nayak. We formed a committee for Netaji’s 125th birth anniversary celebration. Amartya Sen, Abhijeet Banerjee and eminent personalities are part of the committee for the year-long celebration,” the chief minister said.

She also announced to introduce Netaji Subhas University and Jai Hind Vahini. “We know about the birthday but do not know about his death. This is very painful,” she added.

While there is controversy over Bose’s death in a plane crash in Taipei on 18 August, 1945, the central government had in an RTI in 2017 confirmed that he had died in the incident.

TMC MP Saugata Roy claimed that the Central Government has declared Netaji’s birthday as ‘Parakram Diwas’ with the aim to reap political benefits ahead of Assembly polls.

He was quoted by reports as saying, “We do not appreciate politics in Netaji’s name. If the prime minister wanted to do it, he could have done it six months ago. Why is he doing this on the eve of Netaji’s birthday and ahead of Assembly elections in the state?”

Meanwhile, speaking about Modi’s programme a Congress leader said, “There is no doubt that Subhash Chandra Bose ji is the pride of the nation, especially for West Bengal but why both TMC and BJP are remembering him when elections are inching closer? Soon Congress-Left alliance will come up with the Development Agenda of West Bengal and give an alternative to the people of the state.”

Meanwhile, political tensions between the BJP and TMC boiled over in Howrah on Saturday as Modi and Mamata presided over separate events to honour Bose.

BJP alleged that a party member was shot at, while some were beaten with rods and sticks. Crude bombs were also allegedly hurled during the street fight at Bally, triggering panic in the area. Besides, a few bikes and a police vehicle were vandalised, officials said.

On Friday, Bally MLA Baishaki Dalmia was suspended by the Trinamool Congress for alleged anti-party activities, hours after Domjur MLA Rajib Banerjee resigned as a minister in the Mamata Banerjee government.

Police were yet to confirm the firing but the BJP claimed that party member Promod Dubey, who allegedly received a bullet injury in a firing at Abhra Sen Street, was rushed to the Howrah hospital.

Police said that a huge contingent has been deployed in the area to control the situation and prevent any further flare-ups.

Local TMC leaders said that some BJP members were allegedly extorting money from shops in the area, following which people of the area protested and roughed them up.

As the BJP men blocked the GT Road in protest, some TMC supporters tried to remove them, triggering the violence. TMC claimed that BJP supporters hurled crude bombs and set on fire some vehicles to foment trouble in the peaceful locality.