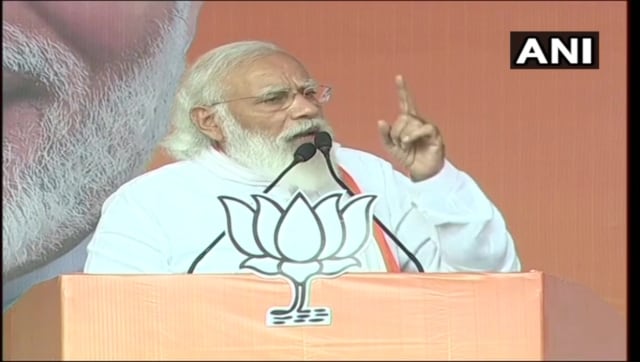 The prime minister while addressing a rally on Tuesday said that under Chief Minister Nitish Kumar, Bihar left behind the darkness of ‘insecurity and anarchy’ of the RJD rule

Narendra Modi at a public rally in Forbesganj in Araria district. ANI

Forbesganj/Saharsa: Prime Minister Narendra Modi on Tuesday dismissed suggestions of anti-incumbency against the Nitish Kumar government in Bihar, asserting that the NDA had spent the last decade meeting the people’s “needs” and was now focused on taking care of their “aspirations.”

Addressing a rally in this north Bihar town of Araria district, Modi also asserted that trends of the first phase of Assembly elections, and the second that was underway, suggested that voters of the state had rejected “double yuvraaj“, an expression he has coined for Congress leader Rahul Gandhi and RJD’s Tejashwi Yadav.

“In Bihar, rangbaazi (rowdyism) and rangdaari (extortion) are losing and vikas (development) and kanoon kaa raaj (rule of law) is winning, parivarvaad (dynasty rule) is being defeated by janatantra (democracy),” he asserted.

Recalling the state’s notoriety for booth capturing in the 1990s, the prime minister said “They (NDA’s predecessors in government) had deprived the poor of even their right to vote. It is the NDA which empowered the downtrodden in the state again.”

Calling the 15 years of Lalu-Rabri rule “jungle raj”, he said its proponents did not want the people of Bihar to chant ‘Bharat Mata Ki Jai’ and ‘Jai Shri Ram’.

The prime minister said under chief minister Nitish Kumar, Bihar had left behind the darkness of “insecurity and anarchy” of the RJD rule.

“Roads and markets today bustle with people even late in the night under Nitish Kumar,” he said.

In the backdrop of young voters’ much talked about dissatisfaction with what has been achieved by the government in the last 15 years, Modi said, “The last decade was spent in fulfilling avashyaktaaein (needs). The current one shall be devoted to meeting the aakankshaaein (aspirations)”.

“We succeeded in bringing gas cylinders to every household. Now we shall be graduating to gas pipelines. In the decade that went by, we built roads, now we are building airports and giving a facelift to the existing ones,” he said.

Training his guns at the Congress, Modi accused the Opposition party of having always made false promises of poverty eradication, farm loan waiver, and one rank-one pension for retired servicemen.

“This is the reason why the party is now left with less than 100 MPs in both Houses of Parliament combined. In states like Uttar Pradesh and Bihar they have been relegated to the third, fourth, or fifth position and are piggybacking other parties for survival,” he added.

The prime minister also expressed delight over the impressive voter turnout in the first phase of elections and the second phase so far despite the corona scare, saying “It is an occasion for the world, all the think tanks across the world, to take note and understand the deep roots of democracy in India”.

He also lavished praise on the Election Commission and poll officials for conducting the mammoth exercise amid the crisis.