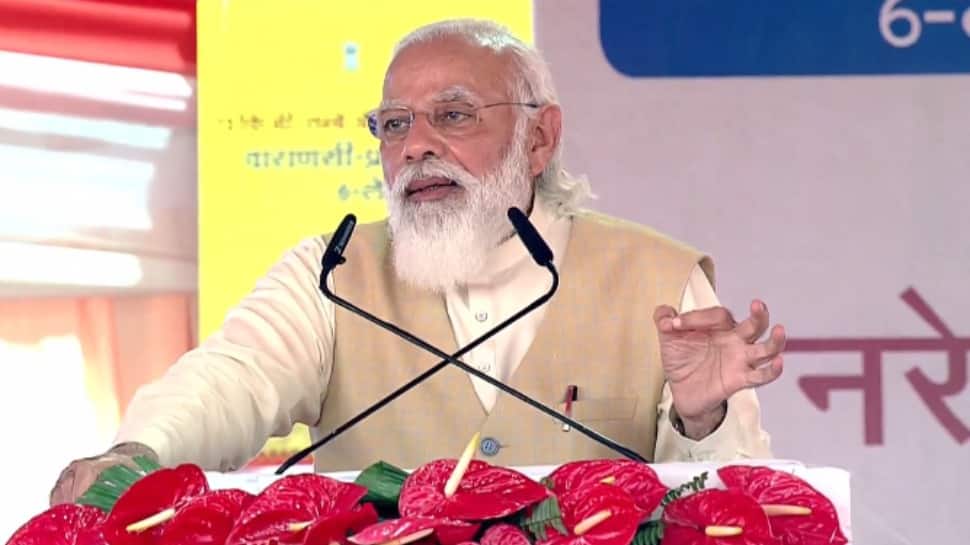 Varanasi: Amid the protests across Delhi-NCR from the past few days against the new agricultural reforms, PM Narendra Modi on Monday (November 30, 2020) said that these laws have given farmers new options and legal protection.

PM Modi said that the farmers are being empowered by giving them options for a bigger market and reforms are being done in the interest of farmers, which will give them more options.

The Prime Minister stated that India’s agricultural products are famous all over the world and asked, “Shouldn’t a farmer get the freedom to sell his produce directly to those who give them better prices and facilities.”

He said that the promise of giving 1.5 times more MSP to farmers as per Swaminathan Commission was fulfilled and that this promise was not only fulfilled on paper but has reached the bank account of the farmers.

“Governments make policies, make laws and regulations. If policies and laws are supported, then some questions are also natural. It is a part of a democracy,” said PM Modi.

Criticizing the opposition, he said earlier the decisions of the government were opposed but now the criticism is based on mere apprehensions. He said confusion is spread in society about what has not happened yet, which will never happen. He said these are the same people who have consistently tricked the farmers for decades.

Prime Minister Modi said in the five years before 2014, pulses of around Rs 6.5 crores were procured from the farmer, but in the subsequent 5 years, pulses worth about Rs 49,000 crore were procured, that is, about 75 times increase.

“In the 5 years prior to 2014, paddy worth Rs 2 lakh crores were purchased. But in the subsequent 5 years, we have passed 5 lakh crore rupees as MSP of paddy to the farmers. That is, almost two and a half times more money has reached the farmer,” stated PM Modi.

He added in the 5 years before 2014, farmers got around Rs 1.5 lakh crore on the purchase of wheat. In the subsequent 5 years, wheat farmers have got Rs 3 lakh crores i.e. around 2 times.

The Prime Minister said decades of deceit make farmers apprehensive but now there is no deceit, work is being done with intentions as pure as ‘Gangajal’.

PM Modi said that the government is constantly answering the farmers who still have some concerns and questions.