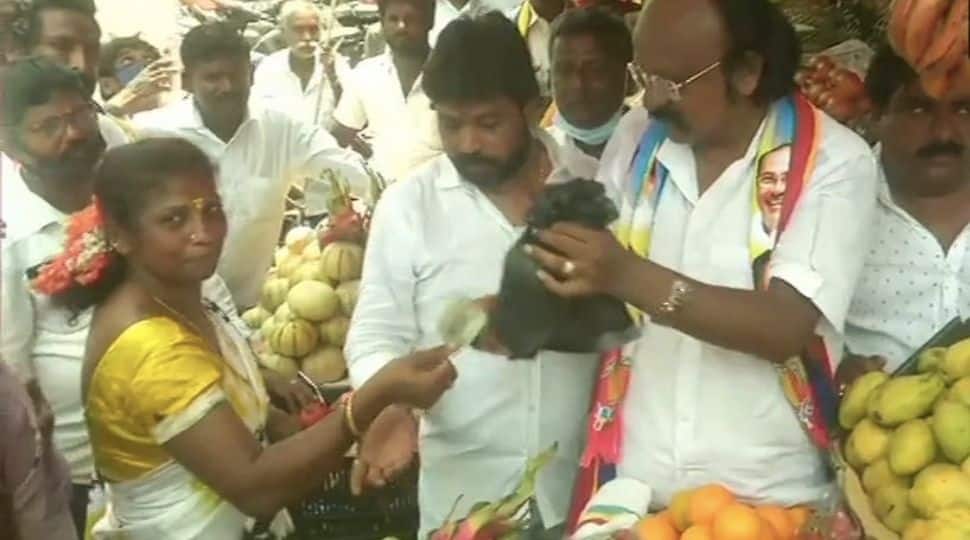 Chennai:  In an unusual campaign to woo voters, Pattali Makkal Katchi (PMK) candidate AVA Kasali is selling mangoes, which is his party’s symbol, in the Triplicane Market area in Chepauk Assembly constituency, where he is facing DMK chief MK Stalin`s son Udhayanidhi Stalin.

Speaking to ANI, he attacked Udhayanidhi saying he has not visited the Chepauk constituency even once and claimed he will win the seat. “I am selling these mangoes. Voters are asking me as I have been contesting against a very heavyweight candidate (Udhayanidhi Stalin) whatever may be the case, he is a candidate.

People know their traditional background what was their past and present of their family. It is only people who lifted them and made them what they are today. I don`t think he is a big contender to me; he is also younger than me,” Kasali said.

“He (Stalin) isn’t bothered to campaign in the constituency. I’m sure I’ll win,” he says pic.twitter.com/J7kBggxcas

Attacking the DMK leader further, the PMK candidate said Udhayanidhi lacks political experience and maturity. “He does not know the harsh realities of life. He does not understand social problems. He has been brought up in a well to do family where you don`t know anything about hardships.

Even his role in movies is the money game. Is he spending any money which he earned from movies for the people? So I think people cannot be fooled anymore,” he said. “Although he might be from a big party, I have been continuing with the election campaign in this heat condition.

People are welcoming me. On the other hand, my opponent (Udhayanidhi Stalin) has not visited the constituency even once. They think they can campaign here only for the last two days and win which is not going to happen. This time mangoes will be across the state,” he added.

The 234-members Tamil Nadu assembly elections will be held in a single phase on April 6 and the counting of votes will be done on May 2.Ruling All India Anna Dravida Munnetra Kazhagam (AIADMK) is contesting the poll in a pre-poll alliance with the Bharatiya Janata Party (BJP) and the Paattali Makkal Katchi (PMK).