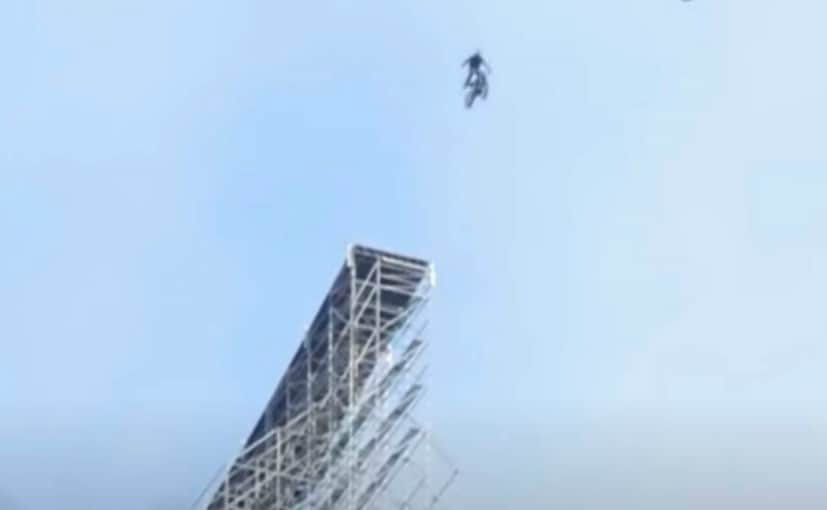 Actor Tom Cruise is seen in a spectacular motorcycle stunt in Norway, possibly for the upcoming instalment of the Mission Impossible movie franchise.

Tom Cruise is at it again! And he’s seen filming a spectacular motorcycle stunt, this time in Norway, for the latest Mission Impossible film. Last month, Cruise was seen in the UK, jumping off a Honda CRF 450 from a ramp, while flanked by drones to capture the action. And the latest stunt shot in Norway seems to be a follow-up to the stunt shot in the UK, in the backdrop of some spectacular scenery in the Norwegian fjords of Hurtigruten. A video from the location of the shoot shows Cruise jumping off from a ramp above a sheer drop, where he proceeds to parachute to safety.

From the video, it’s not clear what motorcycle Cruise is riding, but it could well be a Honda CRF 450, like the one Cruise is seen taking off from the ramp during the shoot in the UK. Footage from that shoot are likely to be used together with the latest footage from Norway, and considering the UK shoot was estimated to be done for 2 million GBP, it just shows how much resources are being used to shoot just one action sequence. From the latest video, drones and even a helicopter is seen shooting the footage, and from the looks of it, once again, it may be Cruise himself doing his own stunts!

Several spy shots from shooting locations of the latest Mission Impossible film show Cruise riding motorcycles, as well as stunt doubles. Tom Cruise himself has been spotted pulling wheelies on a BMW G 310 GS at a former RAF base in Surrey. Clearly, the next instalment of the Mission Impossible film will likely showcase several motorcycle action scenes, and from the looks of it, it’s going to be quite a watch, with Cruise and the motorcycle stunts promising a lot of two-wheeled excitement!