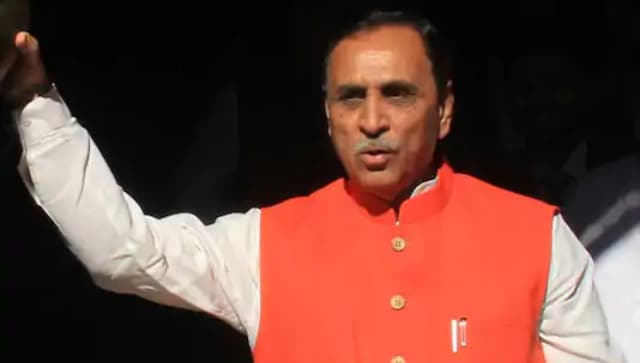 Vadodara: Gujarat Chief Minister Vijay Rupani fainted on stage on Sunday while addressing a rally for upcoming civic polls in Nizampura area of Vadodara, following which he was flown to Ahmedabad and admitted in a hospital, BJP leaders said.

Rupani, 64, was given first aid on the stage after he collapsed. He was later seen descending the stairs of the stage on his own. He was then flown in a helicopter from Vadodara to Ahmedabad and admitted in UN Mehta Hospital. No medical bulletin was issued by the hospital till late night.

Prime Minister Narendra Modi enquired about Rupani’s health over phone, said a statement issued by the Chief Minister’s Office. Modi told Rupani to get himself thoroughly checked and to take proper rest, it said.

This was Rupani’s third political rally during the day in Vadodara. “Rupani fainted on stage and I gave him a primary medical treatment. He was fine and walked back to his car from the stage,” said Vadodara city BJP president Dr Vijay Shah, who was present on the dais at the time of the incident.

BJP leader Bharat Danger told reporters that the CM collapsed while addressing the public meeting in Nizampura area. “Rupani’s security guards caught hold of him when he fell. He was given first aid and was taken to the airport (from where he flew to Ahmedabad),” he said.

“Rupani was unwell for the last two days, but instead of cancelling his public meetings held in Jamnagar on Saturday and in Vadodara on Sunday, he preferred to continue,” Danger said.