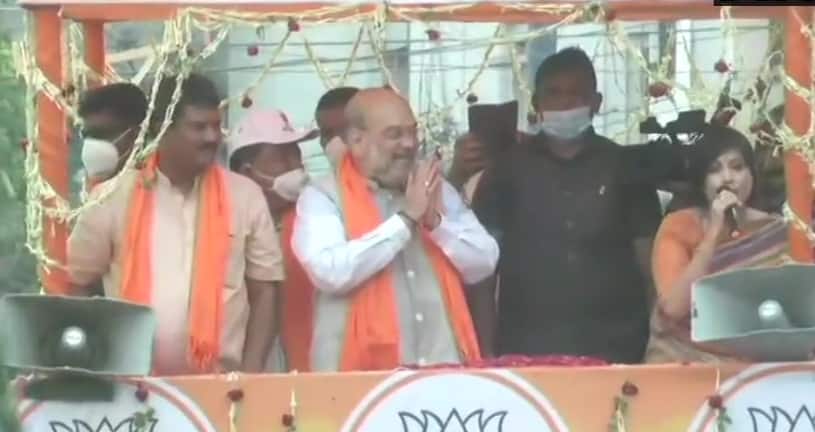 Howrah/Singur: Union Home Minister Amit Shah, who had lunch at the house of a rickshaw puller here on Wednesday (April 6), said the party will form the government in West Bengal with over 200 seats. The ‘rickshawala’ is a Bharatiya Janata Party (BJP) supporter.

Amit Shah had a simple fare of rice, dal, vegetables, and salad made by the womenfolk of the house, during his campaign ahead of the fourth phase of the ongoing assembly elections in the state.

Rajib Banerjee, the BJP candidate for the constituency, was also present also along with Amit Shah. After having his meal, Shah said, “I visited only one gram panchayat but with the enthusiasm I saw, I am confident that Rajib Banerjee will win with a majority.”

The Union Minister also targeted Chief Minister Mamata Banerjee by saying, “Her frustration can be seen in her speeches and behaviour.”

Ahead of the fourth phase of polling scheduled for April 10, Amit Shah also conducted a roadshow in Singur and Domjur. Singur was once a hot spot of the anti-land acquisition movement. Shah promised rapid industrialisation of the area if BJP is voted to power.

The symbolism of the home minister holding a roadshow in Singur, three days after Prime Minister Narendra Modi held a rally there and alleged the “obstructionist mindset” of Chief Minister Mamata Banerjee deprived West Bengal of industries and jobs, was clear–the BJP wants to corner her over the state’s dwindling industrial base and alleged job loss.

Cheered by crowds, Shah stood atop a decorated vehicle with BJP candidate for the Singur seat Rabindranath Bhattacharya, who recently joined the saffron party after leaving the Trinamool Congress, waved at people standing by the roadside and on terraces and balconies.

Speaking to reporters during the show, Shah said Singur will be developed by the next BJP government in the state, adding “We will develop the area by setting up industries and a Rs 500 crore intervention fund has been announced for potatoes, for which the area is known, in our Sankalp Patra (manifesto).”

The BJP government will ensure that small, medium and large industries are set up in Singur, situated beside the national highway connecting Kolkata and New Delhi, after winning the elections, Shah said, adding “We will pursue politics of development, dialogue and cooperation, instead of confrontation.”

Amit Shah also welcomed Mamata Banerjee for invoking Hindu Gods and Goddesses, and for reciting Chandi Path (hymns to Goddess Durga) at public meetings, but quipped it was “too late for her”, adding “The BJP will win Bengal elections with more than 200 seats in the kitty.”

The roadshow meandered through the roads of Singur town for nearly an hour from Dulepara more to Singur police station, as colourful posters, BJP flags and green and saffron balloons dotted route.

Donning a saffron coloured turban, the 89-year-old Bhattacharya, a four-time TMC MLA from Singur before he left the party on being denied a ticket, waved at the crowd standing alongside Shah. Bhattacharya’s induction and nomination had caused a lot of resentment among BJP old-timers in Singur.

Shah is scheduled to hold three more roadshows in the state, including one in Kolkata, on Wednesday. Singur, a small town in Hooghly district, has an old connection between Banerjee and Modi.

The scene of an aggressive movement led by Banerjee against forcible land acquisition by the then Left Front government for the ‘Nano’ project, Singur, along with Nandigram, had catapulted the street fighter TMC leader to power in West Bengal in 2011.